Understanding the culture of a genre is exceedingly vital in order to appreciate the vastness of the scene. When I initially heard the term Horror Punk I had idea of what I envisioned it to be. When I learned about Terror Fúnebre, a Horror Punk Band from Natal – Rio Grande Do Norte, I wanted to dig deeper into their enlightenment. Here is my interview with Terror Fúnebre guitarist Diana (Storm).

Samantha Hollins: I love anything Horror and I love Punk, but I didn’t realize until recently that there was actually a genre with both words as one. What is your definition of Horror Punk?

Diana (Storm): Horror Punk is a lifestyle. It is a way of expressing feelings and opinions about everything that happens to us and the world. The way we find to shout, protest and even show affection.

Samantha Hollins: How long has Terror Fúnebre been on the Brazilian Rock scene?

Diana (Storm): Terror Fúnebre has been active since 2016.

Samantha Hollins: How did your band name summon you? How does it represent your musical journey?

Diana (Storm): I met Terror Fúnebre through the guitarist (André), who is also my boyfriend. When he found out I was a musician, he called me into the band. From then on my life on the Rock path changed completely. I can say that Terror Fúnebre was the door I needed to open to start my life on stage.

Samantha Hollins: When was the first time you fell in love with Rock-n-Roll? How did you get attracted to the Horror Rock genre?

Diana (Storm): My first influence on Rock was guitarist Slash, from the band Guns ‘n Roses. I fell in love at first sight with that man and soon started listening to bands like AC / DC, Linkin Park, Skid Row, among others. From there, I got to know new bands until I got to Horror Punk, where I have the band Zumbis do Espaço as my biggest influence in this style.

Samantha Hollins: Is there a Horror Punk scene within the Punk community or is it interwoven?

Diana (Storm): Yes, and that is a very delicate matter to deal with, because one thing led to another, including Thrash Metal. Horror Punk would not exist without Trash Metal and Punk Rock. Nowadays this idea is passed from one person to another in a very distorted way, even causing fights between people.

Samantha Hollins: Does your culture ever creep into your sound? If so, how does it shift your sound?

Diana (Storm): Yes. As I said, Horror Punk is a way of expressing feelings, so we always put problems and thoughts in our songs. We usually face drought, hunger and violence in our region. So they end up becoming a subject for the lyrics. There are also good things, cultures and personal customs we follow thatalso influence the lyrics. 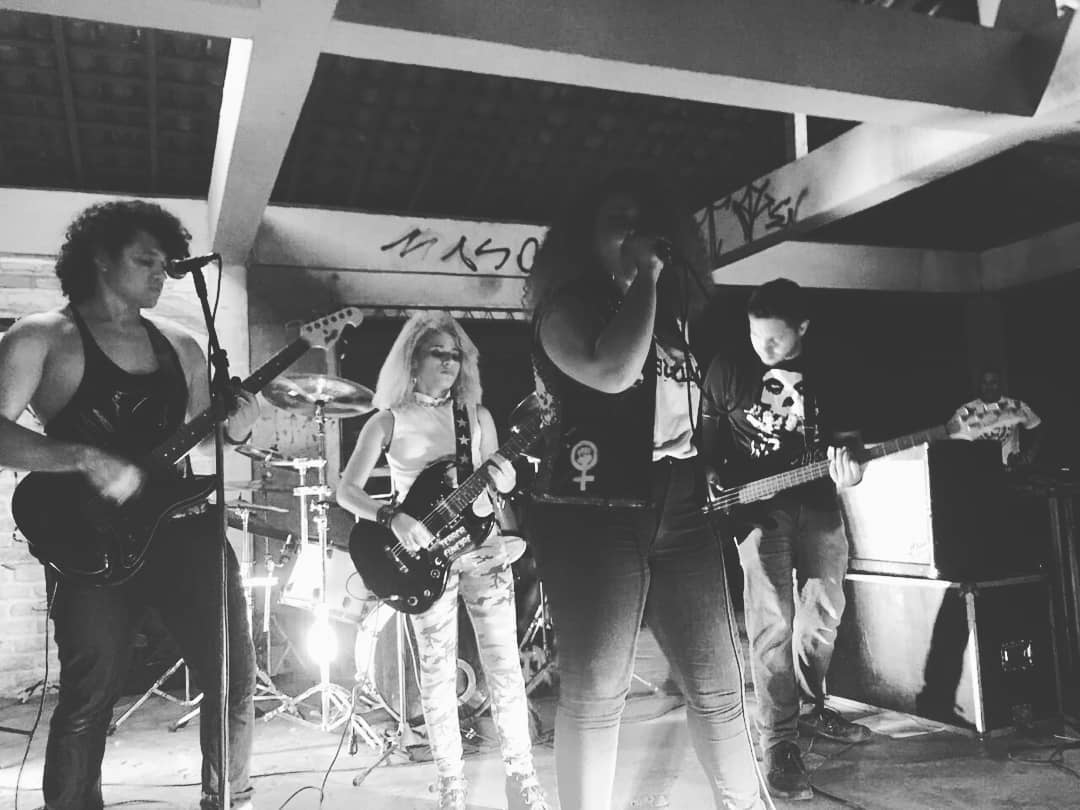 Samantha Hollins: Lyrically how does your content speak to your audience?

Diana (Storm): The instrumental is usually aggressive and the voice also has greater power. We want to show the world our cry and feelings.

Samantha Hollins: What is your mission as creatives in Rock present and future?

Diana (Storm): Influence people to see what happens around the world and help people. Many people from other countries see Brazil as something different from reality and we don’t want that. We will always show the truth through our lyrics and make people empathize with each other.

Samantha Hollins: Thank you for sharing your dynamic creative energy. Best wishes to you and your band.

Treat yourself to the captivating essence of Terror Fúnebre by going to these links: